On November 21, 2013, President Obama issued an updated National Space Transportation Policy providing guidance to federal departments and agencies on the development and use of commercial and governmental space transportation systems. 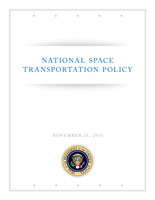 The overarching goal of the policy is to have assured access to diverse regions of space, from suborbital to Earth’s orbit and deep space, in support of civil and national security missions.

The policy directs the Departments of Commerce and Transportation to encourage, facilitate, and promote U.S. commercial space transportation activities, including human spaceflight.

The National Space Transportation Policy recognizes the significance of commercial human spaceflight activity, adding two new goal statements in this area. It codifies NASA’s ongoing commercial crew and cargo program, which is establishing a competitive domestic market for transport to and from the International Space Station.

In addition to the relevant commercial guidelines cited above, the policy directs FAA to work with NASA on a comprehensive safety regime for human spaceflight, covering both governmental and commercial activities with minimal regulatory overlap.

The policy directs agencies to consider the health of the space transportation industrial base when making policy and programmatic decisions. It encourages innovative acquisition approaches that promote affordability, industry planning, and competitive capabilities, infrastructure, and workforce.

The policy directs NASA and the Department of Defense to rely upon U.S.-manufactured space transportation vehicles as the foundation for access to space. It encourages unique acquisition approaches, which will promote competition, stabilize supply chains, and realize economies of scale.

The policy codifies the plan to enable new U.S. commercial space launch providers to compete for U.S. government missions on a level playing field so long as they meet technical criteria for certification.

The policy directs enhancements to the operational efficiency, capacity, responsiveness, and cost effectiveness of federal space launch infrastructure. It calls for consultations with industry to seek to improve launch range scheduling procedures and practices. The updated text also recognizes the need to work with commercial, state, and local spaceports.

The policy declares that the Department of Transportation has exclusive authority to address orbital debris mitigation practices for U.S.-licensed commercial launches.

The 2013 policy reaffirms longstanding guidance and laws on the use of excess intercontinental ballistic missiles (ICBMs) as launch vehicles. The New START Treaty for nuclear disarmanent allows the use of excess ICBMs as satellite launchers, but the United States restricts such use so as to minimize competitive impacts on U.S. commercial firms with comparable launch capabilities.

The policy also directs NASA to seek partnerships with the private sector to enable safe, reliable, and cost-effective commercial spaceflight capabilities and services for the transport of crew and cargo to and from the International Space Station.